Skip to content
Due to the recent State Government announcement of Stage 3 restrictions in effect across metropolitan Melbourne, Council has made the decision to temporary close the Clocktower Centre until further notice. For further information regarding Moonee Valley City Councils response to the COVID-19 pandemic please visit Council’s website: mvcc.vic.gov.au/covid-19/ or call the centre on 9243 9191. Thank you for your understanding and patience during this time. We hope to be welcoming you back to the Clocktower Centre very soon. 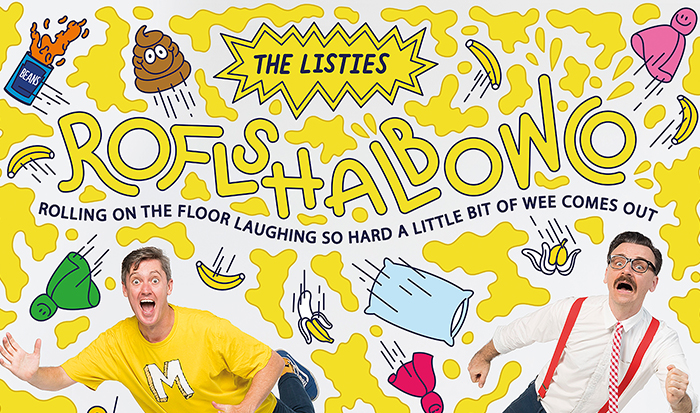 (Rolling on the Floor Laughing So Hard a Little Bit of Wee Comes Out) The Listies & Critical Stages Touring Production Hilarious, ridiculous fun for your kids that will have the whole

Hilarious, ridiculous fun for your kids that will have the whole family in stitches.
Does it have a burpershop quartet?” Yes, yes it does.
“Are there 37 bubble machines?” Of course there are.
“Does the show feature the world’s most annoying song?” Totes!
“Is there a mini panto fairy tale called ‘Jack and the Beans-Talk’ about a boy who eats magic beans and farts himself into space?” YES I MEAN WHAT SHOW DOESN’T HAVE THAT?
“Will I roll on the floor laughing so hard a little bit of wee comes out?” Yes, yes you will… you should probably bring a towel.

Gratuitous, ridiculous, hilarious, joyous and possibly hazardous, Rich and Matt are The Listies, Australia’s maestros of kidult comedy, a multi-award winning duo who win over everyone who comes to see them with their insane, interactive, illogical and irreverent escapades.

ROLLING ON THE FLOOR LAUGHING so hard a little bit of wee comes out is the freshest double act sketch comedy in kid’s entertainment. It’s all of the most popular bits of The Listies’ sell-out shows jam-packed with a brand new set of hilarious comedy routines that will have the whole family in stitches.

*Everyone older than 18 months requires a ticket

Get your tickets now